Party of One: Kalgor Bloodhammer and the Ghouls Through the Breach 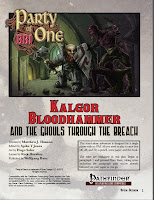 In order to play Open Design's new adventure, Matthew J. Hanson's Kalgor Bloodhammer and the Ghouls through the Breach, one only needs a pen, some paper, and a standard assortment of dice (actually just 1d6, 1d8, 1d12, and 1d20). That is because it is part of their new series, Party of One, a (Pathfinder-compatible) collection of choose-your-own-adventure style solo adventures. Anyone who has read this blog long enough knows that I have major affection for choose-your-own-adventure solo missions, so when I became aware that this had been released, it was an easy buy. Add to that that it was only $3, and it was even easier. I ended up printing it out so I could flip through it more naturally than scrolling up and down in the pdf; it is a shame that the pdf was not linked, so when it said "go to 73" you couldn't click that and be taken to 73. It is also a shame that, despite there being a "character sheet" attached at the end with abilities, it does not have check boxes for the additional items, secrets, and abilities you pick up along the adventure, as that would have greatly have streamlined the process. It also makes a major mistake in indicating that only a d6, d8, and d20 are required: d12 rolls are quite common, and as we all know 1d12≠2d6.

Minor complaints aside, however, KBGB (that name is far too long to type out each time) is a surprisingly nuanced, engrossing adventure. The premise is simple: you are a dwarf who has just joined an elite guard for your city, and the night of your celebration it turns out that you will be pressed into service much sooner than you expected. There is a ghoul attack in the street, and it very quickly turns out that it is not an isolated incident. Through tracking clues, you learn more and more about the attacks and their implications for your entire city. And, of course, you can pick up items, information, and allies along the way.

I say that this is (Pathfinder-compatible) because it doesn't really seem, to me, to distinguish itself as really at all distinctly "Pathfinder." It presents rules as they become relevant, and always gives you a small stat block for you, your allies, and your enemies each time you must be pressed into battle. It has the overall flavor of any generic, vaguely OGL-compatible adventure out there, and at least to any part I discovered that was about where the comparison stopped. I suppose that's why it is labeled as Pathfinder "compatible," since anything OGL can be easily adapted for that system. Nevertheless, I don't want to be bogged down by semantics before I can say that I did, in fact, really enjoy the adventure.

By the time I am writing this, I have run through it four times; each time managing to get a little bit further into the mystery and intrigue that is KGBG. The first couple of times I managed to succumb, rather early, to terrible dice rolls, rather than end up making any sort of terrible decisions on my own. However, as I pressed further, a shocking betrayal resulted in my death once, and then my imprisonment again. KGBG ends up being "hard." Frequently you have to go up against multiple enemies, and you are limited to only one attack per round. Battles rapidly turn into attrition and prayer (o spirit of the dice, hear my call: turn up below 12 on the enemy's turn). Your armor class is high, which makes ordinary attacks endured by the ghouls a bit easier to weather, but there are enough other enemies that you are constantly on your toes. The adventure seems to reward audacious and brash behavior (befitting of a dwarf) over caution and stealth; ghouls are, after all, pouring into the city, and the sooner you can do something about it, the better. Each decision you make seems to have major ramifications, and I feel like I have probably only skimmed the surface of this ten page adventure, so up to this point I'd still label the replay value as "high." Plus, depending on the choices you make, it might be all over for you in under ten minutes, so you can knock it out while you're waiting for something else. All in all, I'd give this one a solid B+, and I look forward to further entries into the Party of One series (and maybe a bound book containing all of them at some point in the future? eh Mr. Baur?).
Posted by Chris Jackson at 2:52 PM

A Night in the Lonesome October Participant 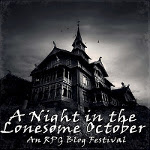 The Order of the d30